Great and the Good at Walkden Launch

It was a who's who from the world of boxing and celebrity as Walkden ABC officially opened its doors.

The club - in partnership with Maverick Stars Trust - has been open for business since COVID restrictions were eased, but Wednesday 23 June marked its inauguration as a community boxing hub. The new facility at Walkden Town Centre has been a labour of love for former British and European champion Jamie Moore and Maverick Stars founder Charlotte Gilley. 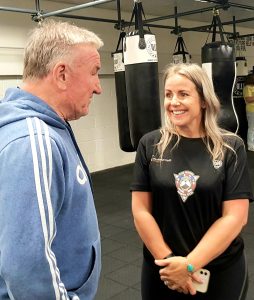 “It's been a couple of years of hard work, but it's fantastic to see this gym finally up and running. Along with Jamie, there are so many brilliant coaches and volunteers involved," Charlotte said.

The opening ceremony was a proud moment for Jamie, who had invited Salford radio legend Mike Sweeney to do the honours and cut the red ribbon.

"What a fantastic event and I'm so proud we've finally brought this gym to fruition," Jamie said.  "I grew up around here and I know it's going to be such a valuable asset to the community for generations to come."

A unique project aimed at supporting boxers with financial advice and employment opportunities is proving to be a big hit in Manchester.

Maverick Stars Trust has teamed up with FCI Markets – a leading financial services provider – to deliver a 12-session course at Collyhurst and Moston ABC. The programme teaches fighters of all abilities about finance and trading. The company has a wealth of experience in the sector and already works in football, advising young professionals.

FCI chief executive and founder Steve Tyjas said: “You have to have commitment and discipline to excel in any kind of sport and it’s the same with trading. You need to have that dedication."

The course guides participants through the practicalities of trading, step by step, starting with the basics and working up to analytics, charting and the daily movement of each price, currency and stock. Former IBF featherweight World champion Josh Warrington, an ambassador for FCI Markets, is a big supporter of the initiative.

This week we pay tribute to Oliver Harrison - trainer of champions, but more importantly a pillar of the Salford community and a mentor and friend to so many. Aged just 58, Oliver died after battling cancer in 2019. 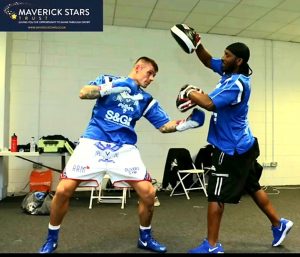 Jamie said: "He made my career. If it wasn't for me coming across Oliver Harrison in my life, there's no way I would've gone on to achieve what I achieved, mainly because he believed in me when nobody else did."

"He was just an amazing person. He always shied away from the limelight; he didn't want it. It was all about the fighters," Martin added.

Maverick Stars Trust is delighted to welcome one of the UK’s top boxing prospects to its list of Ambassadors. Unbeaten middleweight, Brad Rea, has joined forces with the charity to help coach and mentor young people struggling in mainstream education.

The 23year old from Stretford, trained by Blain Younis at Ricky Hatton’s gym in Hyde, has so far amassed an outstanding record of ten fights, ten wins with four stoppages. The St John’s ABC amateur has appeared on Matchroom cards, catching the eye on Sky Sports in his last fight, a one-round demolition of fellow unbeaten fighter Lee Cutler.

Speaking of his new alliance with Maverick Stars, Brad said: "I really enjoy the coaching side of boxing," he said. "I basically grew up in a boxing gym and I know all about the benefits of the sport and how it can help young people stay on the right path.

“Maverick Stars is doing amazing work throughout boxing and I’m delighted to get on board.”

A unique initiative helping boxers with financial advice and employment opportunities has launched in Manchester.

Maverick Stars Trust has teamed up with FCI Markets – a leading financial services provider – to deliver a 12-session course, teaching fighters of all abilities about finance and trading. The company has a wealth of experience in the sector and already works in football, advising young professionals.

FCI chief executive and founder Steve Tyjas said: “There’s a very big synergy between trading and the life of a sportsman. You have to have that commitment to excel in any kind of sport and it’s the same with trading. You need to have that dedication.

“We want to try and show them there’s an opportunity, should they have a career ending injury or just coming to the end of their career, that there is something else that will see them well in the future.

“People think of the financial markets the wrong way. They think you need to have a university degree or be highly educated to do it. We’re trying to show that you don’t. I’m not the most educated guy out there – it’s just about having a bit of common sense, sticking to the rules, being disciplined, and committed. This is open to anyone and everyone.”

The course guides participants through the practicalities of trading, step by step, starting with the basics and working up to

“We start by showing them how to load a trading platform and what the numbers are that you see on that platform. We can grow it to the advanced, where you’re looking at all the analytics into the charting and the daily movement of each price, currency and stock,” Steve added.

Steve and his team are initially delivering the project at Collyhurst & Moston ABC, with plans to extend to other gyms. FCI plans to offer work experience placements with a view to full time employment for the right candidates.

This week we turn our attention to Adrian Fleming, head coach at Leigh ABC in Greater Manchester. The club continues to be a great success, working with thousands of young people of all abilities, from novice to elite. 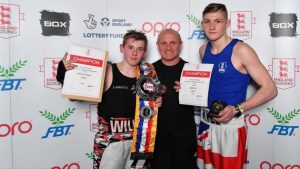 Leigh ABC boasts more than 80 ABA titlists along with countless internationals and those that have gone on to careers in the professional ranks including Isaac Lowe, Marcus Morrison and Jack Catterall.

The club also works tirelessly in the community to encourage young people to get off the streets and into a safe and healthy environment.

Nominating Adrian, Timperley ABC head coach Mark Davidson said: “He’s been in the coaching game for decades, he’s had numerous champions and has done so much. He’s helped so many kids - boys and girls.

“He’s turned so many lives around and is a great coach. Adrian is certainly an unsung hero.”

Along with his club commitments, Adrian is highly regarded on the international scene and is part of the England coaching set-up.

Like most boxing gyms throughout the land, Love ABA Police Boxing Club in Lancashire has once again opened its doors – with a helping hand from Maverick Stars Trust.

The gym, in Rawtenstall, under the guidance of Paddy Connellan, has benefited from the charity’s ‘subs for clubs’ initiative. All members can train for free for the first month post-lockdown. The project is aimed at giving the club a much-needed boost and supporting the boxers’ families, many of whom have struggled during the pandemic.

Maverick Stars has also secured funding for the club with help from MP for Rossendale and Darwen Jake Berry and councillor David Foxcroft.  This funding will ensure Love ABA continues its excellent community work.

Mick has nurtured young boxing talent from the Birmingham area for decades, and is responsible for the development of Maverick Stars Trust ambassador and Team GB star Delicious Orie.

"Mick Maguire, absolute legend of a man," said DJ. "He's looked after me ever since the start of my boxing journey and took me all around the nation entering me in tournaments.

"I couldn't thank this man enough," he added. "Over the years I started to realise that this guy's doing it because of the love of the sport  and the love of helping people, and that's why he's my unsung hero."

Man of the People

He's preparing for the biggest night of his boxing career, but Jazza Dickens is still helping others less fortunate in his home city. The affable Liverpudlian takes on Ryan Walsh in the 'Golden Contract' final with the carrot of a lucrative two-year, five-fight deal up for grabs for the winner.

Community is a word Jazza mentions often, although his work helping others goes largely goes under the radar. He's currently working on an initiative with Maverick Stars to help families affected by addiction - a subject close to his heart owing to his father's drug addiction and subsequent recovery.

"We need to bring back our communities," Jazza said. "Like the work you're doing at Maverick [Stars], it's amazing work and I'd encourage anyone to try and pick their community up, to get involved because so many things come from it."

Jazza is currently sporting a 'Mo' as part of Movember and all donations will go to the Sisters of Mercy who feed and clothe the homeless in Liverpool city centre. If Jazza reaches his £5,000 target, the moustache will stay in place for the Walsh fight

Meanwhile, the likeable featherweight has been training meticulously for the fight of his life under the guidance of coaching team George Vaughan and Maverick Stars' very own Derry Mathews.  The 29 year-old faces a big challenge against Norfolk-based Walsh - a man he has great respect for - but he's convinced it will be his night under the lights when the pair meet at a tv studio in Wakefield.

"A lot of things make sense coming into this final - the amount of time it's took, the COVID situation. I feel like it's all fallen into place," Jazza added.

Maverick Stars, working alongside fighter-turned-trainer Jamie Moore, have been given the green light to go ahead with plans to open a boxing club in Salford.

Walkden ABC will take its place within a unit at the Walkden Shopping centre that will also cater for other youth activities delivered by Salford Community Leisure.

Many hurdles have been overcome to get to this stage of the process, and Jamie, a Maverick Stars ambassador, is delighted the plan is nearing fruition: "It's been nearly three years in the making," he said. "Walkden has the same problems as other areas but it's never had an amateur boxing gym.

"Kids are hanging around the shops and they have no real direction. The gym will go a long way to helping to fix these problems. If it changes just one kid's life, it'll be worth it."