Coaching the Next Gen - Crolla & Quigg

Former world champions Anthony Crolla and Scott Quigg are both relishing life helping to guide the next generation of boxing stars.

The pair have remained stablemates after hanging up the gloves by coaching fighters alongside their former trainer Joe Gallagher in Bolton. Both are big supporters of Maverick Stars - Crolla overseas the 'Operation Warrior' initiative at his amateur club Fox ABC - and are relishing life outside of the ropes.

Click below to hear about life as former fighters, coaching, and why the former sparring partners cannot stop competing.

A Maverick Stars programme aimed at supporting armed forces veterans has grown from strength to strength, with hundreds now taking part at boxing clubs across the nation.

‘Operation Warrior’ has proved an outstanding success. The eight-week courses feature boxing sessions, team building days, guest speakers and mental health first aid. Following an inaugural project in partnership with Tom Harrison House and Derry’s Gym in Liverpool, the programme is now being delivered throughout the north-west, north-east, the midlands and the south-east. Plans are in place to extend the scheme further.

Operation Warrior was set up to support ex-servicemen and women who encounter mental and physical health problems upon leaving the forces. Boxing has a positive effect on confidence, motivation, and stress levels. The initiative is the brainchild of armed forces veteran and head of Maverick’s veterans’ programmes, Tony Gilley.

“Many vets encounter problems when they leave the forces,” Tony said. “There can be problems with addiction, isolation, and poor physical and mental health. Our work is based at boxing clubs and the courses help raise self-esteem through improved fitness and other opportunities.”

The programme at South Wye Police Boxing Academy in Hereford has proved extremely successful. Maverick Stars ambassador and GB boxer Delicious Orie has been a regular at the sessions – when training commitments allow. The talented super-heavyweight is tipped for big things at the Commonwealth Games in Birmingham this summer, and the Paris Olympics in 2024.

Following an inaugural veterans project on Merseyside, eight-week courses - featuring boxing sessions, team building days, guest speakers and mental health first aid - are up and running throughout Greater Manchester, Lancashire (in partnership with Burnley FC), and Tyne & Wear. Plans are in place to extend the initiative to the midlands, and the south-east.

“It’s no secret that many vets encounter problems when they leave the forces. There can be problems with addiction, isolation and poor physical and mental health. Our work is based at boxing clubs and the courses help raise self-esteem through improved fitness and other opportunities.”

Maverick Stars have now directly engaged with more than 800 veterans by working with ten veterans organisations across the regions.

A special guest dropped into a recent Maverick Veterans session at a Hereford gym. GB Boxer Delicious Orie - recently returned from the Tokyo Games - used his significant talents to put participants through their paces. 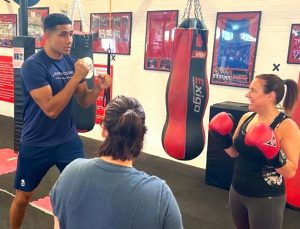 The initiative at South Wye Police Boxing Club is part of Maverick Stars Trust's 'Operation Warrior' - providing support and opportunities for veterans of the British Armed Forces.  Many vets encounter mental and physical health problems upon leaving the forces - boxing has a positive effect on confidence, motivation and and stress levels.

Delicious (DJ for short) is a Maverick Stars ambassador who works across a range of projects for the charity. The Wolverhampton super-heavyweight - born in Moscow to a Russian mother and Nigerian father - is a key member of Team GB and recently returned from Japan where he helped his teammate, and eventual bronze medallist Frazer Clarke, prepare for the tournament.  The experience has made the 23year even hungrier to qualify for Paris 2024 and and ultimately take his place on the podium.

Maverick Veterans are pleased to announce a new partnership with Healthier Heroes CIC.

Their military veterans have started an eight-week ‘Op-Warrior’ programme, hosted at 5 Ways Boxing Academy in Burnley.

“We are very excited to be working in partnership with Maverick Veterans.

“These Boxing sessions are going to be so beneficial for the health and wellbeing of the veterans we support”.

The support offered to their service users includes housing, complex dependency, education, employment and training, as well as tackling isolation, health and well being.

It's been a good week in the press for Maverick Stars Trust with publications nationwide giving column inches to our initiatives.

The Star in Sheffield reports....

Owls captain, Barry Bannan, has helped a local charity drive blitz passed their target of £500 as they seek to provide meals for young kids across the city, becoming the latest footballer to play his part following the incredible work being done by Manchester United’s Marcus Rashford.

Daniel Barton, of Mentalmate said, “We originally had planned to feed 50 children per day in partnership with Maverick Stars Trust… I shared this plan across social media and had a few queries about how people could also get involved in terms of both food and money donations. So I set up a fundraiser for anyone who wanted to help us reach more children.

A community hub has surpassed its expectations of delivering 150 meals a week to the vulnerable- giving out more than SIX times that amount in just a week. Elite Community Food Hub in Halliwell is now seeking to raise £14,000 to keep going until the end of April, as demand for their service soars.

The hub has been working in partnership with Maverick Stars Trust to deliver food to young people and families around Bolton who would normally rely on school for a nutritious meal per day.

Meanwhile, in Bognor Regis, the Observer has this to say....

Southern Counties club, Bognor Regis ABC, was unable to return to its premises of eight years last July because its landlord needed to rent out the space at full cost, 'to recoup losses due to Covid-19 closures'.

Despite 'standing temporarily homeless', the 98-year-old club can now 'look forward to marking its centenary' thanks to support from the local community.

Maverick Stars Trust is delighted to welcome actor Jamie Lomas to our team of ambassadors.

Lomas joins the team following his recent short film 'Lead Belly', where he plays an ex-soldier suffering from post-traumatic stress disorder whilst living on the streets.

The film aims to raise awareness about the struggles homeless veterans face once they are integrated back into society.

Famous for his role in Hollyoaks and an impressive stint as runner-up on 'I'm a Celebrity...Get Me Out of Here!', Jamie will be spearheading 'Operation Warrior', aimed at helping armed forces veterans.

The initiative proved a success upon its launch at Gemini ABC in Liverpool, with veterans taking part in an eight-week programme featuring boxing sessions, team building days, guest speakers and a mental health first aid course.