This week, we asked top trainer and Maverick Stars ambassador Jamie Moore to nominate his hero of the week. It may be a little leftfield, but according to Jamie, Matchroom’s Head of Logistics Darren Flewers, is a man who deserves all the plaudits. 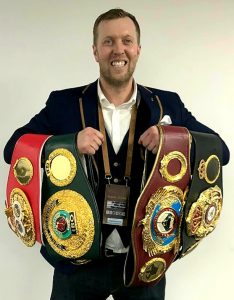 “Obviously, there are many people in boxing who’re unsung heroes – small hall promoters, people in grassroots boxing, but my unsung hero is someone who’s still fresh in my mind from being in the Matchroom bubbles," Jamie explained.

“Darren doesn’t realise the impact he has and the importance of what it is he does to make the shows run smoothly and go ahead as they do.

“He is one of the people that works behind the scenes. Eddie Hearn and Frank Smith are obviously the front men and the most important in terms of decision making and putting big fights together, but Darren arranges transfers, accommodation, he sets up a WhatsApp group to help all the fighters and their teams to settle in wherever they are, home or abroad.

“Darren’s not the only one that helps us all out on fight week, but he does so much for everyone, he’s a cog in the wheel to make it all work and he’s a really important one. If he didn’t orchestrate a lot of the stuff that goes on behind the scenes, none of the shows, on that massive platform, would run as smoothly as they do. He’s very much an unsung hero!”