Ciaran McVarnock is still a professional fighter, but outside of the ring he has done incredible work in aid of Cystic Fibrosis.

Ciaran's partner, Nicole, suffers from the genetic disorder and was rushed into hospital in November 2019 in a serious condition.

Since then, she has made a miraculous recovery thanks to life-saving drug Trikafta and the couple now fundraise in aid of the Cystic Fibrosis Trust.

Ciaran organised a celebrity football match, which raised an incredible £9467 for the charity. 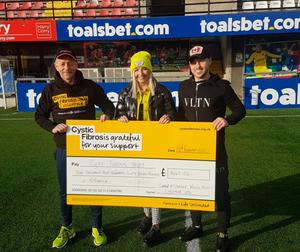 Alongside this, he has taken part in a sky dive to raise more money, and with Nicole they have set up a new clothing brand '65 Roses', with £5 of every order going to Cystic Fibrosis charities.

Matthew McClarty got in touch with us to nominate Ciaran for the award, after meeting the fighter on Belfast Hospital's intensive care unit whilst visiting his Dad.

"He's a kind hearted man who is always wanting to help others whilst striving to be at the top of his game," Matthew said. "He's an inspirational figure who wants to keep pushing himself whilst supporting those around him."