DJ Breaks Down the Big Fight

Tyson Fury and Dillian Whyte will finally do battle at Wembley Stadium this weekend with record numbers in attendance and millions watching around the world. To get an insight as to how this fight might pan out, we spoke to rising heavyweight star Delicious Orie. 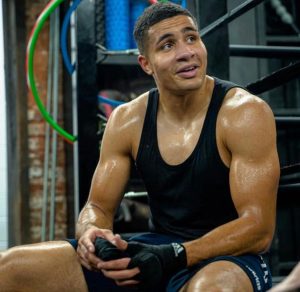 The Maverick Stars ambassador was recently victorious at the BoxAm tournament in Spain and continues to impress in the amateur ranks with GB Boxing.

Casting his eye over Fury’s defence of his WBC title, ‘DJ’ said: “I think it’s a great fight for British fans and British boxing. I’m a fan of both Tyson Fury and Dillian Whyte.

“In terms of the outcome? I think Tyson wins, but to be honest it’s hard to predict – it’s heavyweight boxing. It could be a knockout, it could be an early stoppage, Tyson Fury could make it boring. But Tyson Fury is a little bit smarter and a lot more awkward for Dillian Whyte to handle.”

Along with continuing his stellar progress on the international amateur stage, DJ is still helping to provide opportunities for others. Along with his friend and GB teammate Conner Tudsbury, DJ spent his Easter holidays helping young amateur fighters to train like a GB boxer.

The initiative at Moss Side Fire Station Boxing Club - supported by Maverick Stars Trust – was a big success with the two elite fighters giving nutrition advice, tips on strength and conditioning and boxing technique masterclasses.

DJ Breaks Down the Big Fight