Next Step for Undisputed

Chantelle Cameron will be living the dream when she makes her ring walk as top of the bill in a world title unification fight at London’s O2 arena.

The Maverick Stars ambassador takes on Mary McGee on Saturday, 30 October in a fight that was originally chief support to Dillian Whyte v Otto Wallin. A shoulder injury sustained by Whyte put paid the heavyweight clash, so the battle for Chantelle's WBC and the American's IBF super-lightweight belts is the main event and will be beamed live around the world on DAZN. 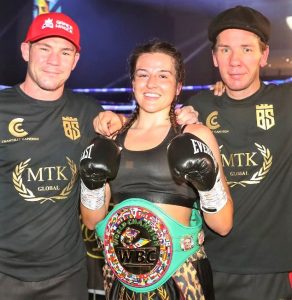 The contest will be the Northampton boxer’s second defence of her title and doubles up as a semi-final in Matchroom’s ‘Road to Undisputed’ tournament to determine the number one women’s fighter at 140lbs.

Reaching her goal of becoming undisputed champion is tantalisingly close, but Chantelle knows there can be no room for complacency.

“She [McGee] has a lot of power, experience and she’s strong, But I feel like I’m a better all-rounder, a better boxer, faster and I’ve got a plan A, B and C. In every department I think I’m better,” Chantelle said.

“Win this fight and I go into the final. They’re talking about February for that and that’s for all the marbles. That’s a dream there, incredible.”

For years there has been talk of Chantelle going head-to-head against Irish superstar and undisputed lightweight champion Katie Taylor. Their paths are no closer to crossing, and although she has always wanted the fight, Chantelle believes that ship may have sailed.

“Realistically, I don’t’ think me versus Katie is going to happen. I’ve been chasing her for so long! There’s only so much chasing you can do – my feet are burnt out!”

Next Step for Undisputed